History of the Peach in New Jersey

The history of the peach prior to its introduction to the Americas is well documented. The peach migrated from China to Persia (Iran) and from there to Greece, then to Italy, France, and Spain. The Spanish explorers brought it to Mexico in 1571 and later to South America. About 1600 it was introduced in North America and appeared in Jamestown, Virginia in 1607. It was cultivated in New Jersey, Delaware, and Maryland in the 1600’s.

Peach growing began in New Jersey in the early 1600’s when colonists began importing European varieties. It was learned by the early settlers that fruit thrived better in the coastal areas of the continent than in Europe. The first area of concentration is believed to have been Cumberland County and the center of production changed many times during the early years. The first peaches were seedlings with white and yellow flesh, and the best of the seedlings became varieties. New Jersey was well suited to the growing of peaches and an atlas published in Scotland in 1684 called New Jersey “The Garden of the World”. Perhaps this is the origin of New Jersey’s nick name “The Garden State.” By 1680, peaches were grown in abundance with extensive orchards from Trenton to New Brunswick. The area of production spread north to Morris County and around Hackettstown.

The peach was the first fruit to receive attention commercially and it is reported in 1683 that peaches were available in New York by the wagonloads from New Jersey orchards. By the mid 1800’s the fruit industry was receiving considerable attention and the entire state was known for its abundance and quality of peaches. Production reached sufficient quantities to enable shipment of over 500,000 bushels to New York markets by 1865. At this time many peaches were being selected and named by New Jersey growers. Some of importance were EARLY and LATE CRAWFORD, REEVES, SMOCK, KEYPORT WHITE, STUMP, MOUNTAIN ROSE, AND IRON MOUNTAIN.

Toward the end of the 1800’s Hunterdon County became the center of peach production, shipping as many as 750,000 bushels in a single season. There were 90 varieties grown but only 20 were with a range from 6-10 years. The short life of peach trees back then was a serious a concern as it still is today.

The peach industry in New Jersey reached its peak during the latter part of the 19th century as measured by trees planted. In 1890, there we re more than 4 million trees in the state, and half of these were in Hunterdon County. In 1886 San Jose Scale, which was imported into California from the orient, gained its first foothold in the East at a nursery near Riverton, New Jersey. It arrived on plum trees from a nursery in California. Before a control measure had been discovered, San Jose Scale had spread throughout the state killing thousands of acres of peach trees. 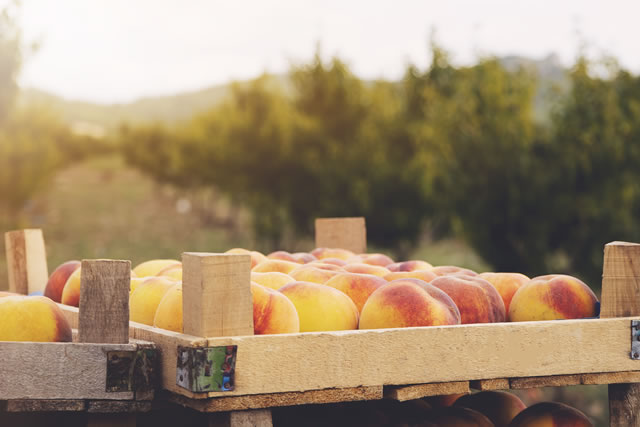 The two basic types of peaches are clingstone and freestone. With clingstone peaches, the flesh “clings” to the “stone” of the peach, making it difficult to separate, and thus more suitable for processing. In addition, this variety retains its flavor and soft texture during processing. According to NASS (2010), roughly 80 percent of processed peaches are canned and 16 percent are frozen. Processed peaches may also be dried, prepared as baby food and concentrated for fruit juice.

The pit of freestone peaches “freely” separates from the flesh, making it ideal for fresh consumption. Freestone peaches grown in New Jersey are generally larger than clingstones with a firmer, juicy texture. While most commonly eaten fresh, these peaches may also be frozen and dried. The peach breeding program began at the New Jersey Agricultural Experiment Station in 1907 under the direction of Dr. C.H. Connors. In 1914, the first commercial variety released was named LIBERTY. Peach breeding began on an extensive scale at Vineland, New Jersey in 1914. Professor M.A. Blake assumed leadership of the breeding program around 1921 and in 1925, nine new varieties were released. An outstanding yellow-fleshed seedling was named GOLDEN JUBILEE in 1926. Professor A.J. Farley was the Extension Pomologist in those early years and a variety was named TRIOGEM for the trio of Connors, Blake, and Farley in the 1940’s. Professor M.A.Blake was is considered the father of the peach industry of New Jersey. He died in 1948 and in 1953, the BLAKE peach was named in his honor.

Many peach varieties have been developed at the Rutgers New Jersey Agricultural Experiment in the past 105 years. The most important today are described elsewhere in this publication. In 1982 a comprehensive peach variety research and evaluation program was established by Rutgers NJAES Cooperative Extension, Gloucester County. Many peach varieties form all over the world have been tested and evaluated in this program and are now planted by New Jersey growers.

Peach production continues to be a challenge in New Jersey with a wide variety of pests, high production and labor costs, irregular weather patterns and vigorous competition from other peach producing areas. In spite of these obstacles New Jersey remains a great place to grow and provide consumers with high quality, flavorful peaches.

With Questions Regarding Jersey Peaches